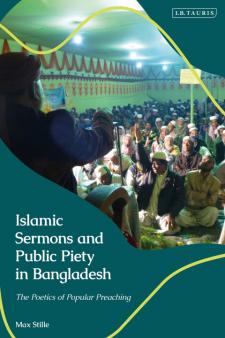 Islamic sermon gatherings are a central form of public piety and public expression in contemporary Bangladesh. Held since the 19th century, waz mahfils became so popular that it is today possible to participate in them on a daily basis in many regions of the country. Despite their significance in the rise of popular politics, the sermons are often disregarded as Islamist propaganda and very little research is dedicated to them. This book provides unprecedented access into these sermon gatherings. Based on fieldwork and interviews, Max Stille analyses an archive of several dozens of sermons. He shows how popular preaching shapes roles and rules of what can be said, imagined, and felt. Waz mahfils are a participatory practice of the labouring classes in which religious, political and poetic consensus overlap. In them, Islamic tenets and morals are part of dramatic narrations, vocal art and affective communication, ranging from immersion and upheaval to laughter about political jokes and parody. Suggesting new ways to interpret musical and performative poetics of Islamic speech, this book calls for expanding conceptions of civic participation and public discourse, and rethinking the role of the senses and religious aesthetics in Islam.