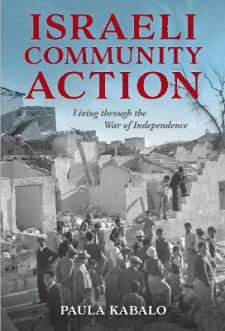 When the 1948 Israeli War of Independence broke out, population centers were rocked by sniper fire, bombings, and roadside ambushes. As the fighting moved out of the cities into desert areas, private citizens and community organizations left behind organized to revitalize and restore life in their devastated communities. In Israeli Community Action, Paula Kabalo presents a vivid portrait of these civilians who strove to help each other cope with the realities of war.

Kabalo explores how civilian militias were recruited, how neighborhoods were protected, how older populations were enlisted into the war effort, and how women were organized to provide medical aid or establish refugee centers. She demonstrates that each phase of the war brought along new challenges to the population of the young state of Israel, but she also illuminates how the engagement of Israelis in community efforts brought them together and shored them up to face the future in their new country.