From Jacobin to Liberal 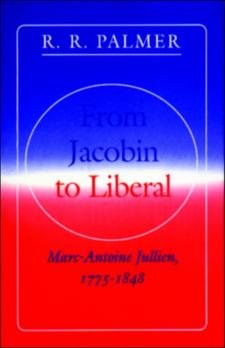 For this book R. R. Palmer has translated selections from the abundant writings of the versatile French political figure and writer Marc-Antoine Jullien, weaving them together with his own extensive commentary into an absorbing narrative of Jullien's life and times. Jullien's hopes and fears for the "progress of humanity" were typical of many of the French bourgeoisie in this turbulent period. His life coincided with the whole era of revolution in Europe and the Americas from 1775 to 1848: he was born in the year when armed rebellion against Britain began in America, he witnessed the fall of the Bastille as a schoolboy in Paris, joined the Jacobin club, took part in the Reign of Terror, advocated democracy, put his hopes in Napoleon Bonaparte, turned against him, and then welcomed his return from Elba. Under the restored Bourbons, he became an outspoken liberal, rejoiced in the revolution of 1830, had doubts about the July monarchy, welcomed the revolution of 1848, and died a few weeks before the election of Louis-Napoleon Bonaparte as president of the Second Republic. Drawn from books, pamphlets, reports, letters, book reviews, magazine articles, poems, and private notes and memoranda, Jullien's comments are supplemented here by letters that his mother wrote during the early years of the French Revolution and by articles by Jullien's collaborators in the Revue Encyclopédique. In Palmer's skilled hands, these selected materials from a now forgotten life vividly portray France's transition from revolutionary republicanism and the Terror through the Napoleonic years to the more placid liberalism of the nineteenth century.