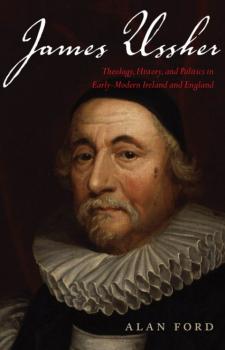 Though known today largely for dating the creation of the world to 4004BC, James Ussher (1581-1656) was an important scholar and ecclesiastical leader in the seventeenth century. As Professor of Theology at Trinity College Dublin, and Archbishop of Armagh from 1625, he shaped the newly protestant Church of Ireland. Tracing its roots back to St Patrick, he gave it a sense of Irish identity and provided a theology which was strongly Calvinist and fiercelyanti-Catholic. In exile in England in the 1640s he advised both king and parliament, trying to heal the ever-widening rift by devising a compromise over church government. Forced finally to choose sides by the outbreak of civil war in 1642, Ussher opted for the royalists, but found it difficult to combine hisloyalty to Charles with his detestation of Catholicism. A meticulous scholar and an extensive researcher, Ussher had a breathtaking command of languages and disciplines - 'learned to a miracle' according to one of his friends. He worked on a series of problems: the early history of bishops, the origins of Christianity in Ireland and Britain, and the implications of double predestination, making advances which were to prove of lasting significance. Tracing the interconnections between this scholarship and his wider ecclesiastical and politicalinterests, Alan Ford throws new light on the character and attitudes of a seminal figure in the history of Irish Protestantism.