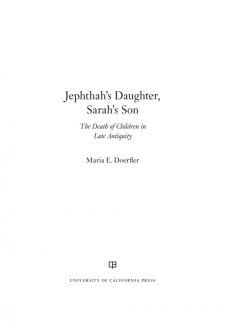 Late antiquity was a perilous time for children, who were often the first victims of economic crisis, war, and disease. They had a one in three chance of dying before their first birthday, with as many as half dying before age ten. Christian writers accordingly sought to speak to the experience of bereavement and to provide cultural scripts for parents who had lost a child. These late ancient writers turned to characters like Eve and Sarah, Job and Jephthah as models for grieving and for confronting or submitting to the divine.

Jephthah's Daughter, Sarah’s Son traces the stories these writers crafted and the ways in which they shaped the lived experience of familial bereavement in ancient Christianity. A compelling social history that conveys the emotional lives of people in the late ancient world, Jephthah's Daughter, Sarah's Son is a powerful portrait of mourning that extends beyond antiquity to the present day.