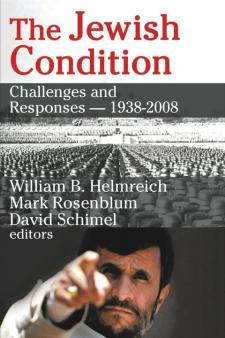 This brilliant set of essays poses the paradigmatic question: are Jews in grave danger today or not? Concern is rooted in the storm clouds of 1938, when the same question arose just prior to the outbreak of the Second World War and the Holocaust. The contributors do not presume that the events of seventy years ago are identical with those today, or that they emanate from the same sources. However, the shared feeling is that Jewish communities worldwide are very much, once again at risk.

In post-1938 Germany, the Nazi state began its march toward world conquest, with the destruction of European Jewry as its centerpiece. In an act of willful blindness, Western democratic leaders chose to negotiate and appease the Hitler regime. Many Jewish leaders also chose to minimize the risks. Seven years later, over 50 million people, including six million Jews had been killed. In 2008, extremist Islamic forces have spawned a global Jihad. State-sponsored terrorism, a war against the West as well as against moderate Islamic states, once again holds the destruction of the Jewish people, and in particular the State of Israel, as a critical goal. The Iranian leadership proclaims that "a world without America and Israel is both possible and feasible."

Against such a diplomatic and historical background a conference was organized resulting in these essays written by Alan Dershowitz, Norman Podhoretz, Michael Walzer, Leonard Fein, and David Pryce-Jones among others. The results are varied at the policy level, but unified in apprehending a disturbing revival of inherited hatred and anti-Semitic outbreaks against Jews both within and outside of Europe. The is a compelling effort that merits the attention of social scientists, policy makers, and those interested in international relations.