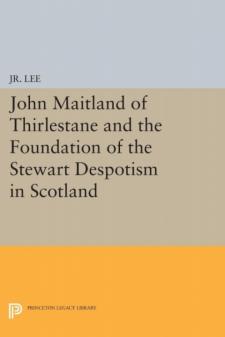 When John Maitland accepted the office of Secretary of State to James VI of Scotland in 1584, he accepted the challenge of three of the most extraordinary and persistent threats to the power of the crown that a king's principal advisor ever faced: the Scottish aristocracy, the Kirk, and Queen Elizabeth of England. By the time of his death eleven years later, Maitland had succeeded in helping his king break the power of the nobility, secure the support of both the Kirk and Elizabeth, and prepare the way for an absolutism of the Stewart kings of Scotland that was not finally destroyed until the Revolution of 1688. This investigation of how Maitland constructed his political coalition and how he held it together is a superb study in Renaissance politics. Originally published in 1959. The Princeton Legacy Library uses the latest print-on-demand technology to again make available previously out-of-print books from the distinguished backlist of Princeton University Press. These editions preserve the original texts of these important books while presenting them in durable paperback and hardcover editions. The goal of the Princeton Legacy Library is to vastly increase access to the rich scholarly heritage found in the thousands of books published by Princeton University Press since its founding in 1905.