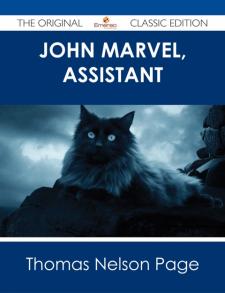 Finally available, a high quality book of the original classic edition of John Marvel, Assistant. It was previously published by other bona fide publishers, and is now, after many years, back in print.

This is a new and freshly published edition of this culturally important work by Thomas Nelson Page, which is now, at last, again available to you.

Get the PDF and EPUB NOW as well. Included in your purchase you have John Marvel, Assistant in EPUB AND PDF format to read on any tablet, eReader, desktop, laptop or smartphone simultaneous - Get it NOW.

Enjoy this classic work today. These selected paragraphs distill the contents and give you a quick look inside John Marvel, Assistant:

My family was an old and distinguished one; that is, it could be traced back about two hundred years, and several of my ancestors had accomplished enough to be known in the history of the State—a fact of which I was so proud that I was quite satisfied at college to rest on their achievements, and felt no need to add to its distinction by any labors of my own.

...I would long ago have made friends with Wolffert, as some others had done since he distinguished himself; for I had been ashamed of my poltroonery in leaving him; but, though he was affable enough with others, he always treated me with such marked reserve that I had finally abandoned my charitable effort to be on easy terms with him.

About Thomas Nelson Page, the Author:

Thomas Nelson Page was a direct descendant of Thomas Nelson, Jr., a signer of the Declaration of Independence and a governor after Statehood, and thus of Robert 'King' Carter, who served as an acting royal governor of Virginia and was one of its wealthiest landowners in the late 17th and early 18th centuries.

...The ideology and thoughts that appear in Page's writing and in Southern ideology are no mere simplistic, archaic world-view; they are part of a complex history that has informed, for worse and for better, the evolution of the Southern mind to today.