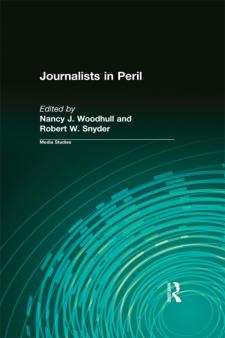 Threats to journalists carry many different lessons, but one is constant: People who would intimidate or kill journalists are usually terrified that someone might find out. Journalists who want to protect one another need do nothing more than what should come naturally to them: report on threats to journalists--big threats and small threats, whether they are directed against the international luminaries of the profession or small timers. Non-journalists can also play a big part in the fight to protect journalists. Next to tough and timely reporting that establishes the facts of a case, nothing protects a journalist so much as public outrage and public support. Ordinary citizens can play an enormous role by pressuring thugs and tyrants who would like to stifle the freedom of the press. The freedom of journalists is consequently the bedrock of freedom for all people. Chapters and contributors to 'Journalists in Peril' include: "The Clash of Arms in Exotic Locales" by Peter Arnett; "Press Freedom--Balkan Style" by Kati Marton; "Grim Prospects for Hong Kong" by John Schidlovsky; "Russian Reporters--Between a Hammer and an Anvil" by losif M. Dzyaloshinsky; "Defiant Publishing in Nigeria" by Dapo Olorunyomi; "Turkish Journalists on Trial" by Ahmet Emin; "In America, Justice for Some" by Ana Arana; and "Blood and Fear in Italy" by Candida Curzi. The tragic accounts detailed in 'Journalists in Peril' are poignantly written and are important reading for all concerned with democracy in the world, especially political scientists, government officials, and those involved in the various communications professions.