A Journey from Madras through the Countries of Mysore, Canara, and Malabar 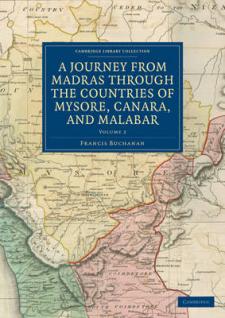 In 1800 Lord Wellesley, the British Governor General of India, appointed the surgeon and botanist Francis Buchanan (1762-1829) to conduct a survey of the kingdom of Mysore in the south of the country, which had recently been annexed by the East India Company. In the resulting three-volume report, first published in 1807, Buchanan (later known as Francis Hamilton) records the physical and human geography of this large area of southern India. He describes the agriculture, arts and commerce, indigenous religions and customs, natural history and society and antiquities of the regions through which he travelled, and illustrates his text with a map and engravings. Volume 2 covers Buchanan's travels west from Sira to southern Malabar and then northwards through that coastal region. Buchanan notes the breeds of cattle and sheep he observes there, and includes a detailed account of an iron mine and the smelting techniques it used.