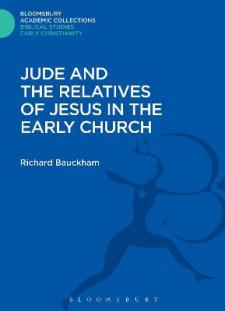 Jude and the Relatives of Jesus in the Early Church

This volume is an original and important contribution to the study of the earliest Palestinian Jewish Christianity. For the first time all the evidence for the role which relatives of Jesus played in the early church is assembled and assessed. Dr. Bauckham discusses a wide range of evidence, not only from the New Testament but also from the Church Fathers, the New Testament Apocrypha, rabbinic literature and Palestinian archaeology. The letter of Jude, in particular, proves to have much to teach us about the theology of the brothers of Jesus and their circle. It illuminates their exegetical methods and their Christology and shows both to have been influential contributions to the development of early Christianity.

This study shows that this neglected New Testament book is far more important for the study of early Christianity than has hitherto been recognized. By setting the letter of Jude within the context of the evidence for the role of relatives of Jesus in the early church, new insights can be revealed into the letter and early Jewish Christianity.