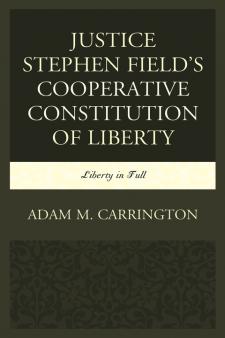 This book examines liberty's Constitutional meaning through the jurisprudence of Justice Stephen Field, one of the late-Nineteenth Century's most influential Supreme Court Justices. A Lincoln appointee who served on the Court from 1863-1897, Field articulated a view of Constitutional liberty that speaks to contemporary disputes. Today, some see liberty as protection through government regulation against private oppression. Others see liberty as protection from government through limits on governmental power. Justice Field is often viewed as siding against government power to regulate, acting as a pre-cursor to the infamous ';Lochner' Era of the Court. This work explains how Field instead saw both these competing conceptions of liberty as legitimate. In fact, the two cooperated toward a common end. In his opinions, Field argued that protections through and from government worked in tandem to guard fundamental individual rights. In describing this view of liberty, Field addressed key Constitutional provisions that remain a source of debate, including some of the earliest interpretations of the Due Process Clause, its relationship to state police power and civil rights, and some of the earliest assertions of a national police power through the Commerce Clause. This work furthermore addresses the underpinnings of Field's views, namely that he grounded his reading of the Constitution in the context of the common law and the Declaration of Independence. In his principles as well as his approach, this book argues, Justice Field presents a helpful discussant in ongoing debates regarding the meaning of liberty and of the Constitution.