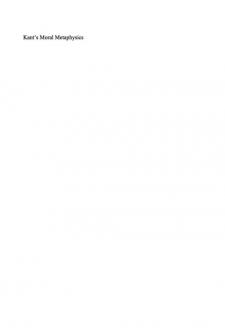 Morality has traditionally been understood to be tied to certain metaphysical beliefs: notably, in the freedom of human persons (to choose right or wrong courses of action), in a god (or gods) who serve(s) as judge(s) of moral character, and in an afterlife as the locus of a “final judgment” on individual behavior. Some scholars read the history of moral philosophy as a gradual disentangling of our moral commitments from such beliefs. Kant is often given an important place in their narratives, despite the fact that Kant himself asserts that some of such beliefs are necessary (necessary, at least, from the practical point of view). Many contemporary neo-Kantian moral philosophers have embraced these “disentangling” narratives or, at any rate, have minimized the connection of Kant’s practical philosophy with controversial metaphysical commitments‑ even with Kant’s transcendental idealism. This volume re-evaluates those interpretations. It is arguably the first collection to systematically explore the metaphysical commitments central to Kant’s practical philosophy, and thus the connections between Kantian ethics, his philosophy of religion, and his epistemological claims concerning our knowledge of the supersensible.