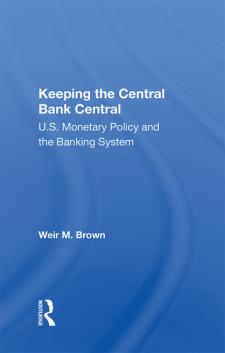 In the period just before and after the founding of the Federal Reserve System in 1913, bankers, economists, and legislators were intensely absorbed in discussing how to assure a proper functional relationship between the future central bank and the commercial banking system. During the sixty-odd years that followed, many changes have occurred to affect one side or the other of the Federal Reserve-banking system relationship. Much less attention has been devoted, however, to the current state of the relationship between the banking system and the Federal Reserve in regard to the conduct of national monetary policy. It is to this area-in the fundamentally important field of macroeconomic policy-that this book is addressed. The field is large, and the Federal Reserve Board shares responsibility with other important economic decision-makers for guiding the course of the economy. The book does not undertake to cover the whole subject of macroeconomic policy. What it does seek to examine are two areas that stand squarely at the common border where Fed monetary control meets the banking system.