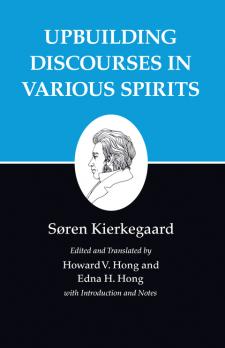 In his praise for Part I of Upbuilding Discourses in Various Spirits, the eminent Kierkegaard scholar Eduard Geismar said, &quote;I am of the opinion that nothing of what he has written is to such a degree before the face of God. Anyone who really wants to understand Kierkegaard does well to begin with it.&quote; These discourses, composed after Kierkegaard had initially intended to end his public writing career, constitute the first work of his &quote;second authorship.&quote; Characterized by Kierkegaard as ethical-ironic, Part One, &quote;Purity of Heart Is to Will One Thing,&quote; offers a penetrating discussion of double-mindedness and ethical integrity. Part Two, &quote;What We Learn from the Lilies in the Field and from the Birds of the Air,&quote; humorously exposes an inverted qualitative difference between the learner and the teacher. In Part Three, &quote;The Gospel of Sufferings, Christian Discourses,&quote; the philosopher explores how joy can come out of suffering.