Labour and Industry in Australia 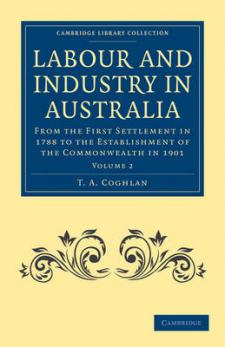 Sir Timothy Coghlan (1855-1926) was the statistician for New South Wales from 1886. He produced the world's first example of national financial accounts, and is regarded as Australia's first 'mandarin'. His advice was sought by state and federal governments on matters as diverse as tax, public sanitation and infant mortality. In 1905 he took up an appointment as a New South Wales government agent in London, remaining there for the rest of his life. First published in 1918, this monumental book is Coghlan's very personal history of Australia, embracing materials, population growth, trade and land. In Volume 2, covering the period to the late 1860s, Coghlan again highlights population growth, and in particular the role of the state and colonies in organizing immigration, as a key factor in the development of the economy. A theme throughout this volume is the growing independence and confidence of each individual state.