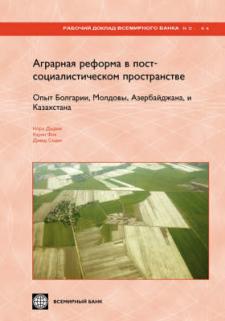 In the past fifteen years, most countries of Central and Eastern Europe and the Commonwealth of Independent States have shifted from predominantly collective to more individualized agriculture. These years also have witnessed the largest fall in agricultural production, yields, and rural employment on record, while the deterioration and dissolution of collective and state farms have been accompanied by a significant drop in rural public services. 'Land Reform and Farm Restructuring in Transition Countries' provides a structured and comparative review of important aspects of land reform and documents important differences in policies between countries to examine why the reforms have not yet lived up to their potential. It is based on data from farm and household surveys and interviews conducted in 2003 and 2004. Case studies from Bulgaria, Moldova, Azerbaijan, and Kazakhstan--countries that have had particular difficulties in land reform, farm restructuring, farm performance, or rural poverty--each highlight a central conundrum about land reform and farm restructuring. The paper concludes with some implications for policy.