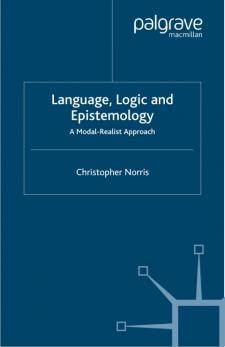 Norris presents a series of closely linked chapters on recent developments in epistemology, philosophy of language, cognitive science, literary theory, musicology and other related fields. While to this extent adopting an interdisciplinary approach, Norris also very forcefully challenges the view that the academic 'disciplines' as we know them are so many artificial constructs of recent date and with no further role than to prop up existing divisions of intellectual labour. He makes his case through some exceptionally acute revisionist readings of diverse thinkers such as Derrida, Paul de Man, Wittgenstein, Chomsky, Michael Dummett and John McDowell. In each instance Norris stresses the value of bringing various trans-disciplinary perspectives to bear while none-the-less maintaining adequate standards of area-specific relevance and method. Most importantly he asserts the central role of recent developments in cognitive science as pointing a way beyond certain otherwise intractable problems in philosophy of mind and language.