Language of the Third Reich 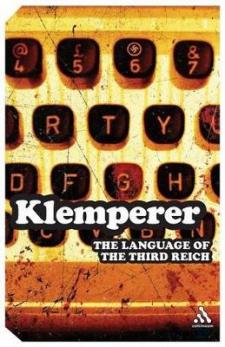 Victor Klemperer (1881-1960) was Professor of French Literature at Dresden University. As a Jew, he was removed from his university post in 1935, only surviving thanks to his marriage to an Aryan. From 1933 to 1935, Klemperer kept detailed diaries, which contain in note form some of the raw material for the German edition of "LTI: Lingua Tertii Imperii". First published in 1957, "The Language of the Third Reich" arose from Klemperer's conviction that the language of the Third Reich helped to create its culture. As Klemperer writes: 'It isn't only Nazi actions that have to vanish, but also the Nazi cast of mind, the typical Nazi way of thinking, and its breeding ground: the language of Nazism.' This brilliant book is by turns entertaining and profound, saddening and horrifying. It is deservedly one of the great twentieth-century studies of language and its engagement with history.