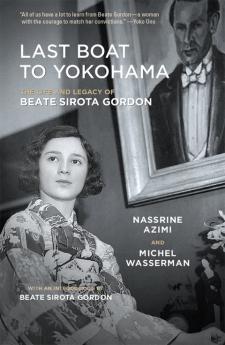 LAST BOAT TO YOKOHAMA: THE LIFE AND LEGACY OF BEATE SIROTA GORDON tells a story of both tragedy and grandeur in the twentieth century. It recounts the life and work of Beate Sirota Gordon: the influence of her father, Leo Sirota, one of the greatest pianists of his generation; her secret work ensuring women’s equality while helping to develop the post-WWII Japanese constitutionat the age of 22; her broad influence on hundreds of Western artists such as Robert Wilson, David Byrne and Peter Sellarswho were introduced to leading contemporary Asian music, dance, theater and visual artists through her extraordinary cross-cultural efforts. The brilliant pianist Leo Sirota, a Ukranian Jew, was forced by early 20th-century war to escape Russia and settle in Austria, where Beate was born. In 1929, he found a welcome home when he emigrated to Japan with his wife and young daughter at the invitation of the Imperial Academy of Music in Tokyo. There, as a professor, he trained many of the country’s musical elite and performed to packed concert halls. Nevertheless, because of his Jewish faith, he spent the last years of World War II in detention, under the harsh watch of the Japanese military police, suffering hunger,