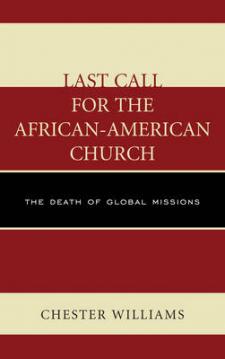 Last Call for the African-American Church

Last Call for the African-American Church revisits the commandment Jesus left his followers to proclaim the gospel worldwide until his return, one that by all accounts is no longer a priority in the contemporary African-American church. Despite the presence of euphoric praise-and-worship celebrations and the proliferation of diverse ministries it advertises as "cutting edge," the implosion of missions has occurred in this church's pulpits and pews.

Selected biblical foundations of missions are provided for those new to the parlance, and for others needing a refresher course. Along with conventional missions' distinctions, Chester Williams logs some concepts in the glossary he himself has constructed, for readers and for collegial review. They include the feminization of missions, rummage sale missions, missions without Jesus, and window dressing missions. For the most part, these concepts represent a radical departure from apostolic missions and are viewed as biblical tinkering and convolution, most importantly, as obstructions to the Great Commission-world harvesting.