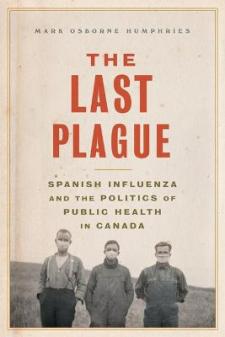 The 'Spanish' influenza of 1918 was the deadliest pandemic in history, killing as many as 50 million people worldwide. Canadian federal public health officials tried to prevent the disease from entering the country by implementing a maritime quarantine, as had been their standard practice since the cholera epidemics of 1832. But the 1918 flu was a different type of disease. In spite of the best efforts of both federal and local officials, up to fifty thousand Canadians died. In The Last Plague, Mark Osborne Humphries examines how federal epidemic disease management strategies developed before the First World War, arguing that the deadliest epidemic in Canadian history ultimately challenged traditional ideas about disease and public health governance. Using federal, provincial, and municipal archival sources, newspapers, and newly discovered military records - as well as original epidemiological studies - Humphries' sweeping national study situates the flu within a larger social, political, and military context for the first time.
His provocative conclusion is that the 1918 flu crisis had important long-term consequences at the national level, ushering in the 'modern' era of public health in Canada.