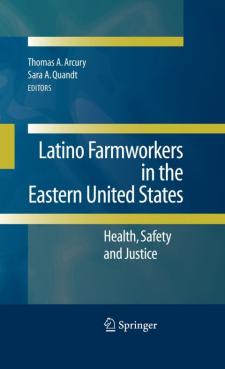 They work at some of America's most hazardous jobs, have few protections, and receive some of the lowest wages. Latino Farmworkers in the Eastern United States describes this understudied and underserved population. Taking a social justice stance, this volume examines the health and living conditions of workers in agriculture, while advocating for equality. Contributors cover all major areas of illness and injury (including occupational, environmental, infections, and pesticides), while also focusing on systemic social conditions, from lax industry regulations to lack of basic services-problems that are exacerbated by workers' status as recent immigrants. Mental health burdens from the effects of discrimination to substance use, as well as the cumulative impact of workers' separation from families are discussed for a comprehensive, meticulously documented resource.Keeping its findings grounded in agricultural, farm-labor, cultural, and geographic contexts, the book:Highlights the unique characteristics of the farmworker population in the eastern United States.Discusses occupational health problems among farmworkers, both general (e.g., musculoskeletal disorders) and job-specific (e.g., green tobacco sickness).Includes in-depth chapters on pesticide exposure, infectious diseases, and mental health.Reports on health issues specific to women and children.Reviews the current state of advocacy programs.Offers possible solutions for injuries related to specific types of jobs. Proposes a social justice agenda to improve occupational and environmental policy for farmworkers.Written to serve both the seasoned professional and the newcomer, Latino Farmworkers in the Eastern United States is a bedrock source of information for those providing health and social services in the community, for researchers investigating health and safety disparities, and for advocates and policymakers working to correct them.