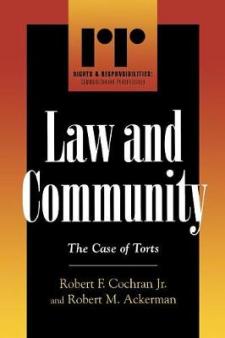 In Habits of the Heart, Robert Bellah found that American's lives exhibit strong strains of both individualism and communitarianism, but that their predominant language is that of individualism. American law reveals a similar pattern, both in the dominance of individualist rhetoric and in the existence of a quieter, often unnoticed, communitarian strain. Law and Community: The Case of Torts uses tort law-the law through which individuals recover from those who have injured them-as a window through which to explore the relationship between law and community. Tort rules are frequently American society's method of sorting out the rights and responsibilities of individuals, and the authors find that tort law exhibits communitarian strains even as it attempts to protect individuals from harm. Robert F. Cochran Jr. and Robert M. Ackerman eloquently argue that we should balance our concern for individual rights with the need to preserve those institutions-such as families, religious congregations, and governments-that help build the social capital that keeps society together.