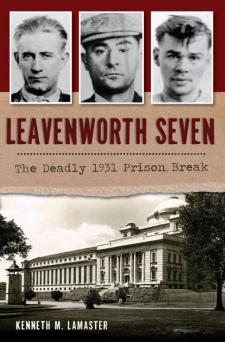 The infamous escape from the maximum security federal prison is recounted in gripping detail in this Depression Era true crime history. On December 11, 1931, chaos erupted behind the limestone walls of Leavenworth Penitentiary as seven desperate men put months of planning into action. Aided by notorious gangsters Frank Nash, George Machine Gun Kelly and Thomas James Holden, these convicts enacted one of the most legendary prison breaks in history, blazing a path to freedom with stolen cars and terrorized hostages. But their audacious escape was only the beginning. Across Kansas, anyone who could carry a gun and knew the terrain quickly picked up the pursuit. In Leavenworth Seven, historian and Kansas native Kenneth LaMaster recounts the incredible story through first-person accounts, news reports, and official FBI files.