Lectures on Colonization and Colonies: Volume 2 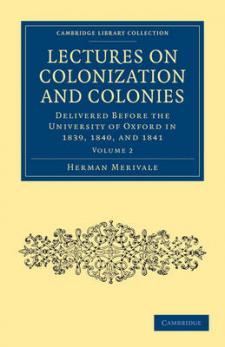 Herman Merivale (1806-1874) was an English civil servant, historian and economist. After graduating from Trinity College, Oxford, in 1827 he was called to the bar in 1832. Merivale was elected Professor of Political Economy at the University of Oxford in 1837, and was appointed Permanent Under-Secretary to the Colonies in 1848. These volumes, first published in 1841, contain Merivale's influential series of lectures on the political economy of colonization which he delivered at the University of Oxford in 1839, 1840 and 1841. He discusses a broad range of topics related to colonization, analyzing its economic effects on the mother country through emigration and discussing the laws governing the generation of wealth and growth of colonies. His lectures also include an influential criticism of the Wakefield Scheme of colonization and provide valuable insights into contemporary opinions on the economic management of colonies. Volume 2 contains Lectures 12-22.