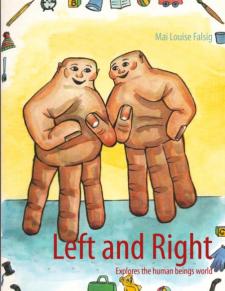 One cozy evening while they in the living room were playing with their tiny toy cars, their mother and father where watching the television. They saw something about a red cross. It was not just only about the red cross because they could both see and hear many people talk and entertain with songs and stand-up comedians. Suddenly they heard a woman's voice say: "It is important that all of us give a hand to Africa." The twins stopped in the middle of their fun and looked scary at one another.

It's a funny book with linguistic quirks, where we hear a lot about the many ways to express the words. Mai Louise Falsig tells the story of Left and Right, exploring the world.

It is a book about the hands world in which we follow the two hands. The Twins: Left and Right.

The story starts with the twins' birth. We get a brief glimpse into the first part of their upbringing; but most of the book is about their infamous outing where they first become acquainted with all the dangers that lurk in the human world. Even though it's a children's book it is certainly a book that can easily be read by kids as well as elder people.