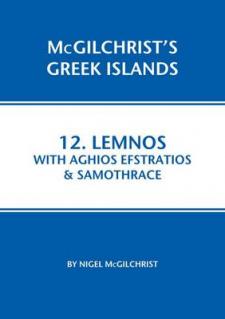 Lemnos has one of the most unusual landscapes of the northern Aegean islands - not only its mountainous west but also the grassy rolling expanses of the east have a character not encountered elsewhere. The island acquired importance very early on and Poliochni on the island's east coast is generally considered to be the oldest organised city in Europe. The capital Myrina is dominated by an impressive Venetian castle and the villages and towns have an attractive local style of architecture.
In 1968 the town of Aghios Efstratios was razed to the ground by a massive earthquake from which it has only partially recovered. The interior of the island is mostly uncultivated and little frequented.
Samothrace has a solitude and grandeur that are epic. Its rugged gorges and peaks, its trees, waters, winds and shores possess something of primeval simplicity. It is perhaps no surprise that an important and very ancient cult should have evolved on the slopes of Mount Saos. Few Greek sites raise so many unanswered questions as the Sanctuary of the Great Gods. The walker, climber, naturalist or poet could ask for little more from an Aegean island. Goats are everywhere.