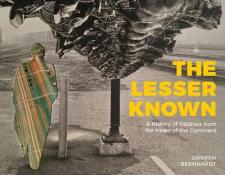 Manitobas history is one of being carved. Ice sculpted the land before nomadic first people pressed trails across it. Southern First Nations dug into the earth to grow corn and potatoes while those in the north mined it for quartz used in arrowheads. Fur traders arrived, expanding on Indigenous trading networks and shaping new ones. Then came settlers who chiselled the terrain with villages, towns and cities. But there is failure and suffering etched into the history, too. In Winnipeg, slums emerged as the citys population boomed. There were more workers than jobs and the pay was paltry. Immigrants and First Nations were treated as second-class, shunted to the fringes. Rebellions and strikes, political scandals and natural disasters occurred as the people melded Manitoba. That past has been thoroughly chronicled, yet within it are lesser-known stories of people, places and events. Darren Bernhardt shares odd tales lost in time, such as The Tin Can Cathedral, the first independent Ukrainian church in North America; the jail cell hidden beneath a Winnipeg theatre; the bear pit of Confusion Corner; gardening competitions between fur trading forts and more. Once deemed important enough to be documented, these stories are now buried. It's time to carve away at them once again.