A Letter from Frank 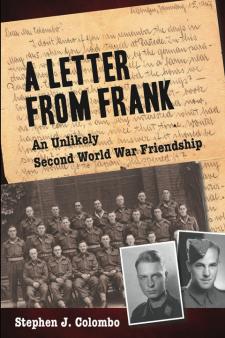 On the last day of the Second World War, Frank and Russ fought each other. In the days after, they became friends. This is the remarkable tale of a long-forgotten letter. It was written from Germany in the aftermath of the Second World War to a Canadian in a peaceful Southern Ontario town. Both had been soldiers and had met on a German battlefield. The letter lay unseen for years and was found by the Canadian’s son long after the old soldier’s death. This book tells how that faded letter led to the discovery of the one-time German paratrooper who became his father’s friend in the immediate aftermath of the war. A Letter from Frank is part war story and part biography, following the lives of Russ Colombo, the Canadian soldier, and Frank Sikora, the German paratrooper. One grew up during the Depression in Ontario, the other was a German in Nazi-occupied Czechoslovakia. This non-fiction narrative also chronicles author Stephen J. Colombo’s struggle to come to terms with a father haunted by the war. Their recollections provide insights into the events that shaped the generations that forged a modern Canada and rebuilt Germany after its near-total devastation. In a surprising twist, this book also provides previously unknown historical details of later NHL president Clarence Campbell at war (Campbell was Russ Colombo’s commanding officer).