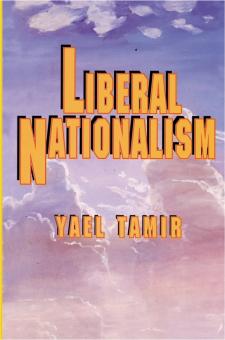 "This is a most timely, intelligent, well-written, and absorbing essay on a central and painful social and political problem of out time."--Sir Isaiah Berlin "The major achievement of this remarkable book is a critical theory of nationalism, worked through historical and contemporary examples, explaining the value of national commitments and defining their moral limits. Tamir explores a set of problems that philosophers have been notably reluctant to take on, and leaves us all in her debt."--Michael Walzer In this provocative work, Yael Tamir urges liberals not to surrender the concept of nationalism to conservative, chauvinist, or racist ideologies. In her view, liberalism, with its respect for personal autonomy, reflection, and choice, and nationalism, with its emphasis on belonging, loyalty, and solidarity are not irreconcilable. Here she offers a new theory, "liberal nationalism," which allows each set of values to accommodate the other. Tamir sees nationalism as an affirmation of communal and cultural memberships and as a quest for recognition and self-respect. Persuasively she argues that national groups can enjoy these benefits through political arrangements other than the nation-state. While acknowledging that nationalism places members of national minorities at a disadvantage, the author offers guidelines for alleviating the problems involved using examples from currents conflicts in the Middle East and in Eastern Europe. Liberal Nationalismis an impressive attempt to tie together a wide range of issues often kept apart: personal autonomy, cultural membership, political obligations, particularity versus impartiality in moral duties, and global justice. Drawing on material from disparate fields--including political philosophy, ethics, law, and sociology--Tamir brings out important and previously unnoticed interconnections between them, offering a new perspective on the influence of nationalism on modern political philosophy.