Liberal Workers of the World, Unite? 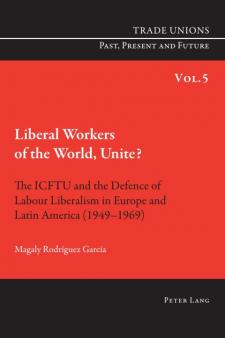 The history of international free trade union organisations during the first two decades of the Cold War is an important but often neglected aspect of the development of post-war labour and liberalism. In this path-breaking book, Rodríguez García fills this void in the historical literature by offering a comparative analysis of two cases, the European Regional Organisation (ERO) and the Inter-American Regional Workers’ Organisation (ORIT), which were created in the early 1950s as regional branches of the International Confederation of Free Trade Unions (ICFTU). The author employs the term ‘labour liberalism’ to describe their wide variety of functions. She argues that social democratic and reformist trade unions, which made up the bulk of ICFTU members, were fundamentally shaped by liberal values, even while calling for the active participation of organised labour in the planning and implementation of projects promoting liberal democracy and socio-economic development at home and abroad. By placing international free trade unionism centre stage, this book adds significantly to our understanding of post-war labour and liberalism.