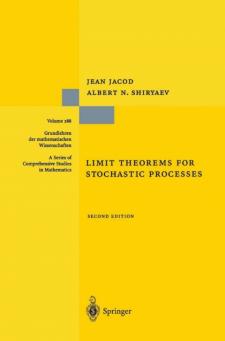 Initially the theory of convergence in law of stochastic processes was developed quite independently from the theory of martingales, semimartingales and stochastic integrals. Apart from a few exceptions essentially concerning diffusion processes, it is only recently that the relation between the two theories has been thoroughly studied. The authors of this Grundlehren volume, two of the international leaders in the field, propose a systematic exposition of convergence in law for stochastic processes, from the point of view of semimartingale theory, with emphasis on results that are useful for mathematical theory and mathematical statistics. This leads them to develop in detail some particularly useful parts of the general theory of stochastic processes, such as martingale problems, and absolute continuity or contiguity results. The book contains an introduction to the theory of martingales and semimartingales, random measures stochastic integrales, Skorokhod topology, etc., as well as a large number of results which have never appeared in book form, and some entirely new results. The second edition contains some additions to the text and references. Some parts are completely rewritten.