Literature, Intertextuality, and the American Revolution 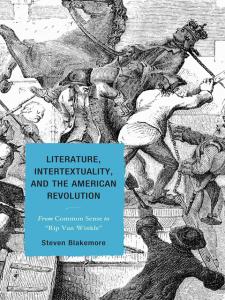 Dealing with Thomas Paine's Common Sense (1776), John Trumbull's M'Fingal (1776-82), Philip Freneau's "The British-Prison Ship" (1781), J. Hector St. John de Crèvecoeur's Letters from an American Farmer (1782), and Washington Irving's "Rip Van Winkle" (1819-20), Steven Blakemore breaks new ground in assessing the strategies of subversion and intertextuality used during the American Revolution. Blakemore also crystallizes the historical contexts that link these works together – contexts that have been missed or overlooked by critics and scholars. The five works additionally illuminate issues of history (The Norman Conquest, the English Civil War, and the French Revolution) and gender as they impinge on American-revolutionary discourse. The result is five new readings of significant revolutionary-era works that suggest fruitful entries into other literatures of the Revolution. Blakemore demonstrates the nexus between literature and history in the revolutionary era and how it created an intertextual dialogue in the formation of the first postcolonial critiques of the British Empire.