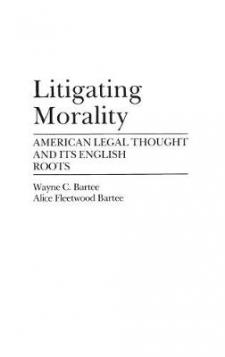 This volume is a thematic study in legal history that uses past and present landmark court cases to analyze the legal and historical development of moral regulatory policies in America and resulting debates. Using a critical variable approach, the book demonstrates how different elements of the legal process have historically influenced the litigation of various moral issues. Five moral policies are included: abortion, sodomy, pornography, criminal insanity, and the death penalty. The book's framework for analysis uses examples from English legal history and links them to American cases, demonstrating how moral regulatory policies are impacted by the legal process: by laws, by judges and juries, by legal scholars, and by attorneys.

Following a brief introduction, Chapter 1 examines how protagonists in the bitter moral and legal controversy over abortion in America have sought to fortify their positions with the views of prominent English legal authorities. The authors discuss the role of English legal scholars in court opinion and oral arguments in Webster and in Roe v. Wade, and debates Roe's interpretation of the English legalists. Chapter 2 describes how attempts to expand a right of privacy under the federal Constitution to include sodomy failed the test for common law rights (Rights of Englishmen) in Bowers v. Hardwick (1986), and includes a history of sodomy in early English and American law. Chapter 3 discusses pornography standards and laws, highlighting the history of legal actions taken against Memoirs of a Woman of Pleasure in both England and the U.S., demonstrating the role of precedent in American judicial efforts to define pornography. In Chapter 4, which deals with the criminal insanity defense, the influential role of the defense attorney on case outcomes is illustrated in cases such as England's McNaughton case (1843) and America's Hinckley case (1982). Chapter 5 deals with cruel and unusual punishment throughout U.S. and English history. The book ends with an epilogue which ties together the idea of the American legal process as an inherited English process, reiterating how decisionmakers continually mine the past to find traditions and sources of moral values for justifying or criticizing current laws and policies.