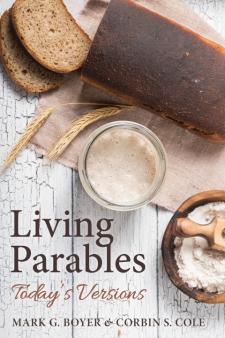 Living Parables: Today's Versions presents parables in updated language and images. Biblical parables are culture-bound; they are embedded in images that were well-known to a Jewish culture. Jesus was a first-century, Jewish, Galilean peasant, and his concerns, speech, and idioms belong to that culture. His milieu is far removed from ours today. The images found in parables carried meaning that is lost on modern audiences.
A simple example will suffice. In the Jewish world of the first century, leaven was considered to be corrupt because people did not understand how bacteria worked. On the most important day of the year--Passover--bread had to be unleavened, uncorrupted. Today, no one thinks of yeast in that way. If we want bread dough to rise, we need to leaven it. Therefore, what image might Jesus use today that carries some of the same cultural connotations that yeast or leaven carried in his world? Might he speak about Ebola virus or radioactivity? Those images carry the same negativity that yeast or leaven bore in his world. This book contains parables found in the New Testament in a form that Jesus might tell today.