The Locust and the Bee 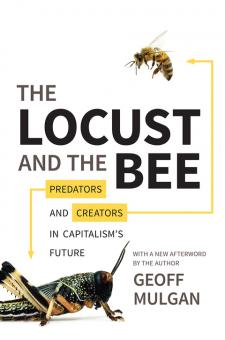 How to harness capitalism's dynamism to create an economy that promotes well-being and rewards creation The recent economic crisis was a dramatic reminder that capitalism can both produce and destroy. It's a system that by its very nature encourages predators and creators, locusts and bees. But, as Geoff Mulgan argues in this compelling, imaginative, and important book, the economic crisis also presents a historic opportunity to choose a radically different future for capitalism, one that maximizes its creative power and minimizes its destructive force. In an engaging and wide-ranging argument, Mulgan digs into the history of capitalism across the world to show its animating ideas, its utopias and dystopias, as well as its contradictions and possibilities. Drawing on a subtle framework for understanding systemic change, he shows how new political settlements reshaped capitalism in the past and are likely to do so in the future. By reconnecting value to real-life ideas of growth, he argues, efficiency and entrepreneurship can be harnessed to promote better lives and relationships rather than just a growth in the quantity of material consumption. Healthcare, education, and green industries are already becoming dominant sectors in the wealthier economies, and the fields of social innovation, enterprise, and investment are rapidly moving into the mainstream—all indicators of how capital could be made more of a servant and less a master. This is a book for anyone who wonders where capitalism might be heading next—and who wants to help make sure that its future avoids the mistakes of the past. This edition of The Locust and the Bee includes a new afterword in which the author lays out some of the key challenges facing capitalism in the twenty-first century.