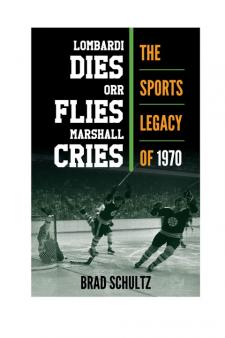 The year 1970 was grim in the United States and worldwide. Vietnam, continuing civil and political divisions, a fear of growing lawlessness, all seemed to point to a bleak future. The 70s were also a time when traditional boundaries were being challenged, from the color of skin to the length of hair. Sports events, issues, and athletes from the very first year of this tumultuous decade reflect the dramatic changes that were taking place around the country. Nowhere was this more evident than in college football, where the University of Texas became the last all-white national champion in 1970, even as a freshman still ineligible to play was standing by to bring about integration. In Lombardi Dies, Orr Flies, Marshall Cries: The Sports Legacy of 1970, Brad Schultz covers the most significant and momentous sports stories from this single year in American history, reflecting on the deeper impact of these events both on the sporting world and on society as a whole. Integration, homosexuality, drugs, lawsuits, and tragedy all crossed the sporting landscape in 1970, including pivotal moments such as student-athlete protests against racism in college football, the debut of Monday Night Football, a challenge to baseball’s reserve clause, and the plane crash carrying Marshall University’s football team that killed everyone on board. Schultz tells these stories and more, thoughtfully placing them within the context of the political, social, and cultural events taking place across the country and around the world. Many of the athletes from 1970 may no longer be with us, their records may have been broken, and younger athletes may have taken their place, but forty-five years later, it is time to look back and reflect on the significance of the events that took place in this unforgettable sports year. Chronicling a remarkable time in the history of American sports, this book will interest historians, sports fans, and those wanting to learn more about the impact of sports on culture and society.