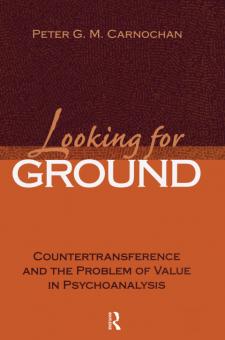 Despite a half-century of literature documenting the experience and meanings of countertransference in analytic practice, the concept remains a source of controversy. For Peter Carnochan, this can be addressed only by revisiting historical, epistemological, and moral issues intrinsic to the analytic enterprise. Looking for Ground is the first attempt to provide a comprehensive understanding of countertransference on the basis of a contemporary reappraisal of just such foundational assumptions.       Carnochan begins by reviewing the history of the psychoanalytic encounter and how it has been accompanied by changes in the understanding of countertransference. He skillfully delineates the complexities that underlie Freud's apparent proscription of countertransference before tracing the broadening of the concept in the hands of later theorists. Part II examines the problem of epistemology in contemporary analytic practice.  The answer to this apparent quandary, he holds, resides in a contemporary appreciation of affect, which, rather than merely limiting or skewing perception, forms an essential "promontory" for human knowing. The final section of Looking for Ground takes up what Carnochan terms the "moral architecture" of psychoanalysis. Rejecting the claim that analysis operates in a realm outside conventional accounts of value, he argues that the analytic alternative to traditional moralism is not tantamount to emancipation from the problem of morality.        With wide-ranging scholarship and graceful writing, Carnochan refracts the major theoretical and clinical issues at stake in contemporary psychoanalytic debates through the lens of countertransference - its history, its evolution, its philosophical ground, its moral dimensions.  He shows how the examination of countertransference provides a unique and compelling window through which to apprehend and reappraise those basic claims at the heart of the psychoanalytic endeavor.