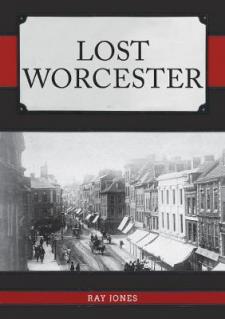 Situated on the banks of the River Severn, the landmark of the city of Worcester is its magnificent medieval cathedral, but it is also renowned for its porcelain and delightful cricket ground, said to be one of the most beautiful in the country. Worcester has a wealth of history and was known as 'the Faithful City' due to its loyalty to the king during the Civil War.

In Lost Worcester, local author Ray Jones presents a fascinating look at the city over more than 100 years to concentrate on what has been lost, including buildings, industry, people and the way of life. Here are the industries that were once important to Worcester's prosperity, such as the porcelain, glove, mail-order catalogue (Kays) and car component sectors. The Three Counties Show and agriculture are included, while other chapters concentrate on sport and the lost Theatre Royal. Also highlighted is the career of William Henry Barribal, the Worcester-trained artist whose work appeared on many postcards and playing cards. Barribal produced several designs that were used by the Theatre Royal and local firms.

Commencing with images of the city centre and then journeying around the suburbs east and west of the River Severn, this book is an informative and illuminating portrait of the city's past.