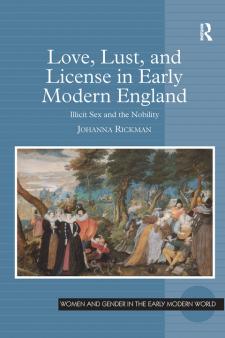 Focusing on cases of extramarital sex, Johanna Rickman investigates fornication, adultery and bastard bearing among the English nobility during the Elizabethan and early Stuart period. Since members of the nobility were not generally brought before the ecclesiastical courts, which had jurisdiction over other citizens' sexual offences, Rickman's sources include collections of family papers (primarily letters), state papers, and literary texts (prescriptive manuals, love sonnets, satirical verse, and prose romances), as well as legal documents. Rickman explores how attitudes towards illicit sex varied greatly throughout the period of study, roughly 1560 - 1630. Whole some viewed it as a minor infraction, others, directed by a religious moral code, viewed it as a serious sin. seeks to illuminate the place of noblewomenin early modern aristocratic culture, both as historical subjects (considering personal circumstances) and as a social group (considering social position and status).She argues that two different gender ideals were in operation simultaneously: one primarily religious ideal, which lauded female silence, obedience, and chastity, and another, more secular ideal, which required noblewomen to be beautiful, witty, brave, and receptive to the games of courtly love.