Lutherans and the Longest War 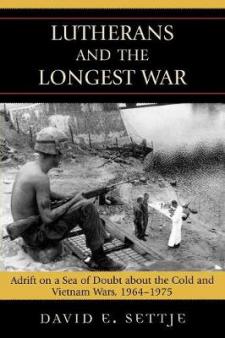 Through the lens of American Lutheranism, this book offers a unique examination into the intersection of religion, war, foreign policy, church politics, and nationalism during the contentious 1960s and 1970s. It contributes a two-pronged investigation of American history during the Vietnam War era. First, it outlines how this diverse group of Christians understood foreign policy and the churches' relationship to it. Lutherans offer a broad spectrum of religious, political, and diplomatic points of view because they never have represented a homogenous or unified group in U.S. history. Second, this investigation provides the perspective of one cross section of Americans who often remain hidden from historic memory: the silent majority as so labeled during the Richard M. Nixon administration. Most Lutherans held 'moderate' religious and political ideologies, but Lutherans also had representatives from the far left and far right. Lutherans also signify the Cold War context of this decade with a relatively uniform hostility toward the Soviet Union and the People's Republic of China. Yet, simultaneously they vigorously debated whether or not Communists had infiltrated U.S. institutions and contentiously disagreed about the Vietnam War. Further reflecting America at that time, by the mid-1970s they had reached a tentative reconciliation with one another because the infighting had so tired them. In doing so, they healed some of the wounds created by a decade of conflict but failed to learn lessons from the experience because they refused to dialogue further about it.