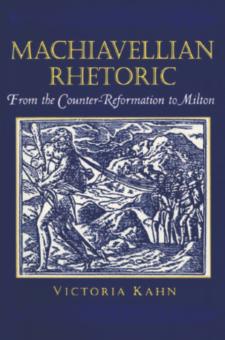 Historians of political thought have argued that the real Machiavelli is the republican thinker and theorist of civic virtù. Machiavellian Rhetoric argues in contrast that Renaissance readers were right to see Machiavelli as a Machiavel, a figure of force and fraud, rhetorical cunning and deception. Taking the rhetorical Machiavel as a point of departure, Victoria Kahn argues that this figure is not simply the result of a naïve misreading of Machiavelli but is attuned to the rhetorical dimension of his political theory in a way that later thematic readings of Machiavelli are not. Her aim is to provide a revised history of Renaissance Machiavellism, particularly in England: one that sees the Machiavel and the republican as equally valid--and related--readings of Machiavelli's work. In this revised history, Machiavelli offers a rhetoric for dealing with the realm of de facto political power, rather than a political theory with a coherent thematic content; and Renaissance Machiavellism includes a variety of rhetorically sophisticated appreciations and appropriations of Machiavelli's own rhetorical approach to politics. Part I offers readings of The Prince, The Discourses, and Counter-Reformation responses to Machiavelli. Part II discusses the reception of Machiavelli in sixteenth-and seventeenth-century England. Part III focuses on Milton, especially Areopagitica, Comus, and Paradise Lost.