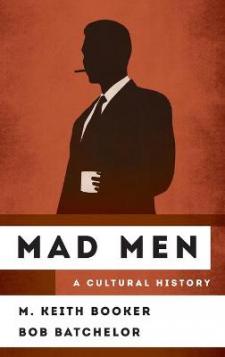 From the opening credits that feature a silhouette falling among skyscrapers, Mad Men transcended its role as a series about the Madison Avenue advertising industry to become a modern classic. For seven seasons, Mad Men asked viewers to contemplate the 1960s anew, reassessing the tumultuous era's stance on women's rights, race, war, politics, and family relationships that comprise the American Dream. Set in the heart of the twentieth century, the show brought to light how deeply we still are connected to that age. The result is a show that continually asks us to rethink our own families, lives, work, and ethical beliefs as we strive for a better world.

In Mad Men: A Cultural History, M. Keith Booker and Bob Batchelor offer an engaging analysis of the series, providing in-depth examinations of its many themes and nostalgic portrayals of the years from Camelot to Vietnam and beyond. Highly regarded cultural scholars and critics, Booker and Batchelor examine the show in its entirety, presenting readers with a deep but accessible exploration of the series, as well as look at its larger meanings and implications. This cultural history perspective reveals Mad Men's critical importance as a TV series, as well as its role as a tool for helping viewers understand how they are shaped by history and culture.

As a showcase in America's new "golden age of television," Mad Men reveals the deep hold history and nostalgia have on viewers, particularly when combined with stunning visuals and intricate writing and storylines. With this volume as their guide, readers will enjoy contemplating the show's place among the most lauded popular culture touchstones of the twenty-first century. As it engages with ideas central to the American experience-from the evolution of gender roles to family dynamics and workplace relationships-Mad Men: A Cultural History brings to life the significance of this profound yet entertaining series.