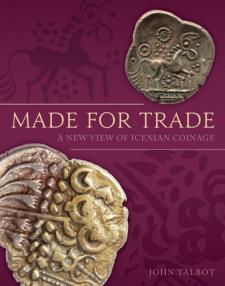 The Late Iron Age coinage of England has long been recognized as an invaluable potential source of information about pre-Roman Britain, although its purpose has been much debated and never clearly established. Most research using this source material has been either detailed numismatic studies, which seek to categorize and tabulate the types of coin and order them chronologically based on stylistic change, or more general attempts to draw out meaning from the imagery or inscriptions on the coins. In Made for Trade, John Talbot presents the findings of a decade-long investigation that has challenged many preconceptions about the period. The coinage of the Icenian East Anglia was used as the raw material with a view to establishing its original purpose and what it can tell us about society and the use of coinage in the Late Iron Age of this region. A die-study was performed on every known example – over 10,000 – coins. Each coin was created by a metal pellet being struck by two dies, and the die-study sought to identify the dies used in each of the 20,000 strikes. Because dies wear, change and are replaced, this enabled definitive chronologies to be constructed and the underlying organization of the coinage to be fully appreciated for the first time. It is believed to be one of the largest such studies ever attempted and the first of this scale for British Iron Age coinage. Talbot further explores production, weight and metal content as the coinage evolved, the use of imagery and inscriptions, and patterns of hoarding. These various threads demonstrate that the coinage was economic in nature and reflected development of a more sophisticated monetary society than had previously been thought possible, contradicting many previous assumptions.