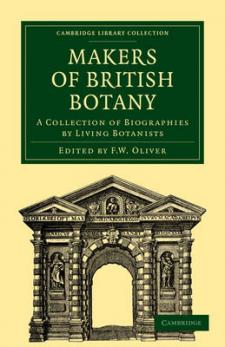 First published in 1913, this volume reproduces a series of lectures on influential botanists delivered in 1911 in the Botanical Department of University College, London. The subjects of these biographies include Sir William Hooker (1785-1865), the first Director of Kew, and John Ray (1627-1705), considered the founder of scientific botany in Britain. The biographies are written by distinguished botanists of the period, over half of them holding a university professorship and membership of the Royal Society. Edited by F. W. Oliver (1864-1951), Professor of Botany at University College, London, from 1890 to 1929, these essays provide information on the lives, and discuss the scientific contributions, of each botanist, each contributor specialising in the same area of botany as the subject. The wide range of subjects covered demonstrates the development of key botanical concepts and the growth of scientific botany in the eighteenth and nineteenth centuries.