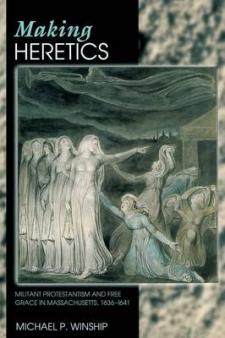 Making Heretics is a major new narrative of the famous Massachusetts disputes of the late 1630s misleadingly labeled the "antinomian controversy" by later historians. Drawing on an unprecedented range of sources, Michael Winship fundamentally recasts these interlocked religious and political struggles as a complex ongoing interaction of personalities and personal agendas and as a succession of short-term events with cumulative results. Previously neglected figures like Sir Henry Vane and John Wheelwright assume leading roles in the processes that nearly ended Massachusetts, while more familiar "hot Protestants" like John Cotton and Anne Hutchinson are relocated in larger frameworks. The book features a striking portrayal of the minister Thomas Shepard as an angry heresy-hunting militant, helping to set the volatile terms on which the disputes were conducted and keeping the flames of contention stoked even as he ostensibly attempted to quell them.
The first book-length treatment in forty years, Making Heretics locates its story in rich contexts, ranging from ministerial quarrels and negotiations over fine but bitterly contested theological points to the shadowy worlds of orthodox and unorthodox lay piety, and from the transatlantic struggles over the Massachusetts Bay Company's charter to the fraught apocalyptic geopolitics of the Reformation itself. An object study in the ways that puritanism generated, managed, and failed to manage diversity, Making Heretics carries its account on into England in the 1640s and 1650s and helps explain the differing fortunes of puritanism in the Old and New Worlds.