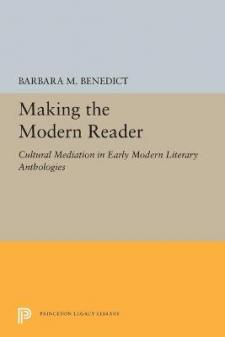 Inquiring into the formation of a literary canon during the Restoration and the eighteenth century, Barbara Benedict poses the question, "Do anthologies reflect or shape contemporary literary taste?" She finds that there was a cultural dialectic at work: miscellanies and anthologies transmitted particular tastes while in turn being influenced by the larger culture they helped to create. Benedict reveals how anthologies of the time often created a consensus of literary and aesthetic values by providing a bridge between the tastes of authors, editors, printers, booksellers, and readers.

Making the Modern Reader, the first full treatment of the early modern anthology, is in part a history of the London printing trade as well as of the professionalization of criticism. Benedict thoroughly documents the historical redefinition of the reader: once a member of a communal literary culture, the reader became private and introspective, morally and culturally shaped by choices in reading. She argues that eighteenth-century collections promised the reader that culture could be acquired through the absorption of literary values. This process of cultural education appealed to a middle class seeking to become discriminating consumers of art.

By addressing this neglected genre, Benedict contributes a new perspective on the tension between popular and high culture, between the common reader and the elite. This book will interest scholars working in cultural studies and those studying noncanonical texts as well as eighteenth-century literature in general.

The Princeton Legacy Library uses the latest print-on-demand technology to again make available previously out-of-print books from the distinguished backlist of Princeton University Press. These editions preserve the original texts of these important books while presenting them in durable paperback and hardcover editions. The goal of the Princeton Legacy Library is to vastly increase access to the rich scholarly heritage found in the thousands of books published by Princeton University Press since its founding in 1905.