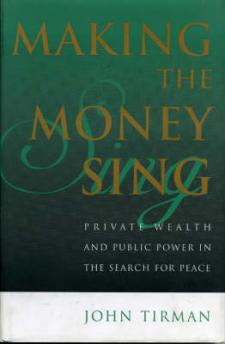 Can well-placed funding make a difference in world affairs? In the early 1980s, a close-knit group of innovative philanthropists (including the author) dared to fund the burgeoning social movement to end the nuclear arms race. The nuclear freeze campaign and other organizations dedicated to disarmament thrived as a result of the timely investments of this group. Before long, larger foundations joined in, building a formidable opposition to Reagan's Cold War policies. The peace movement and arms control experts they funded built a public demand for detente and convinced decisionmakers to reduce the nuclear threat. At the end of the Cold War and throughout the 1990s, the funders' group fragmented into several different directions. Among those was support for a strong new movement toward civil society which meshes conflict resolution with a dedication to economic justice, democratic participation, and other universal values. The author's fund, the Winston Foundation for World Peace, was a leader in that effort. From the Winston Foundation to MacArthur, Soros, Ford, Rockefeller, and many others along the way, this is the story of the strategy sessions, the activist meetings, the funding battles, and the political fallout that ensued on an occasion when major funders chose to actively engage in world affairs. Part memoir, part social change analysis, Making the Money Sing is a provocative, insider's look at the cloistered world of philanthropy and the way that money can make a difference in changing the shape of history.