The Making of a Transnational Capitalist Class 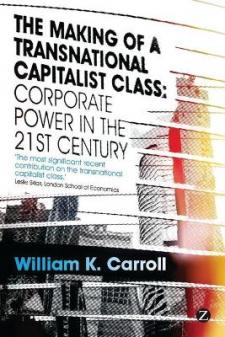 Throughout the world, there has been a growing wave of interest in global corporate power and the rise of a transnational capitalist class, triggered by economic and political transformations that have blurred national borders and disembedded corporate business from national domiciles. Using social network analysis, William Carroll maps the changing field of power generated by elite relations among the world's largest corporations and related political organizations.

Carroll provides an in-depth analysis that spans the three decades of the late 20th and early 21st century, when capitalist globalization attained unprecedented momentum, propelled both by the transnationalization of accumulation and by the political paradigm of transnational neoliberalism. This has been an era in which national governments have deregulated capital, international institutions such as the World Trade Organization and the World Economic Forum have gained prominence, and production and finance have become more fully transnational, increasing the structural power of capital over communities and workers.

Within this context of transformation, the book charts the making of a transnational capitalist class, reaching beyond national forms of capitalist class organization into a global field, but facing spirited opposition from below in an ongoing struggle that is also a struggle over alternative global futures.